"I was worried about the ridiculous charges mentioned, so I tried to get a second opinion. That alerted me to the fact that they were doing something illegal," Lewis Ridley says.

After graduating from Liverpool John Moores University, the 23-year-old found his first job - and a studio flat in the city's Baltic Triangle.

His letting agent tried charging £180 for admin and a referencing check.

But a new law had come into effect on 1 June in England. It made charging upfront fees for services including viewings, credit checks, references and setting up a tenancy illegal.

When something didn't seem right, Lewis sought help on Twitter.

Other social media users alerted him to the recent tenant fees ban in England.

"Usually I'm quite plugged into stuff but the news about tenancy fees and 1 June just passed me by," Lewis says.

The letting agent admitted their mistake and apologised after Lewis challenged them. 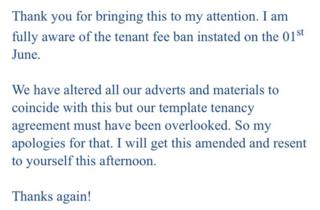 Landlords or agents found charging the fees can be fined £5,000 for a first offence.

Lewis says the ban has made the cost of living "a little bit more affordable".

The average amount of additional fees paid before the ban was between £100 and £300, according to the English Housing Survey.

"I would have had to borrow from Mum and Dad to be able to afford them," Lewis says.

"I'm very fortunate to be in a position where I may have been able to do that but so many families today couldn't afford to offer that support."

Previous research by Citizens Advice indicated 42% of people paying letting agents' fees had to borrow money to pay them. 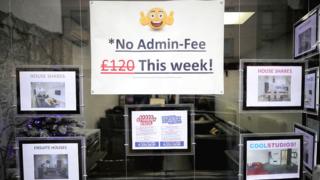 But figures released to BBC News suggest tenants are still confused about the ban.

Enquiries to Citizens Advice about tenant fees rose by 54%, to 430, in the month after the law was introduced, while The Property Ombudsman (TPO) received 68. 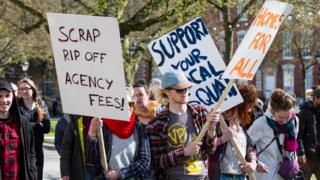 A TPO official said most had been from renters unsure whether the new law affected existing tenancies.

Those who signed a tenancy agreement before 1 June may still face fees in their contract for the next 12 months, including renewal fees.

The Property Redress Scheme, meanwhile, estimated it had taken double the number of enquiries from tenants, as well as calls from letting agents checking they were implementing new rules correctly.

The Ministry of Housing, Communities and Local Government said the rise in enquiries showed "that tenants are becoming increasingly aware of their rights".

What you can still be charged for:

The only payments you can now be asked for in England are:

- Security deposit - now capped at five weeks' rentholding deposit to take a property off the market - capped at one week's rent. - Early termination payment - if you decide to leave before the fixed term of your tenancy has ended.

- Change of sharer fee - if you replace a tenant - Lost keys or security device such as an electronic fob.

Rachael Gore, of Citizens Advice, said tenants should question all upfront payments and ask for receipts from their landlord or letting agent.

What about the rest of the UK?

A ban on upfront letting fees has been in place since 2012 in Scotland.

The Welsh assembly has passed a law that will stop landlords and agents charging tenants extra fees from September 2019.